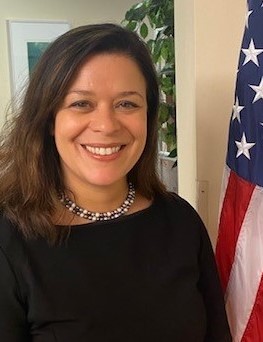 A career member of the Senior Foreign Service, Evyenia Sidereas served most recently as the Director of the Department of State’s Office of Arabian Peninsula Affairs in the Bureau of Near Eastern Affairs and as Gulf Director at the National Security Council at the beginning of the Biden/Harris administration.  Previously, Ms. Sidereas was the Political Minister Counselor at the U.S. Embassy in Berlin from 2017-2020, and served as Deputy Director of the Syria Transition and Response Team at the U.S. Mission to Turkey from 2014-2016.  She has also been posted in Thailand, Kosovo, Egypt, Iraq, and in several domestic assignments at the State Department.

A native of Chicago, Ms. Sidereas attended DePaul University and obtained her master’s degree from the London School of Economics.  She speaks Greek and is conversant in German and Arabic.