Human Trafficking Prevention Month in the United States, a Moment to Address a Global Problem 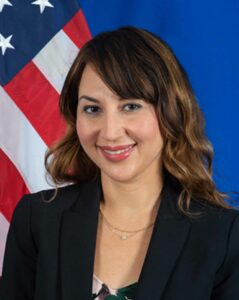 On December 30, 2021, U.S. President Biden proclaimed January 2022 as National Human Trafficking Prevention Month. An estimated 24.9 million people are subjected to some form of human trafficking worldwide, including in the United States, and COVID-19 continues to make millions more vulnerable to exploitation by human traffickers.

Since 2010, every U.S. President has designated January as a National Human Trafficking Prevention month by Presidential Proclamation. U.S. embassies and consulates play an important role in raising awareness around the world about the different forms of human trafficking and ways to identify and address this crime.

Human trafficking deprives millions of people of their dignity and freedom, erodes the rule of law, and simultaneously threatens public safety and national security.  Human traffickers prey on adults and children of all ages, genders, backgrounds, and nationalities, exploiting them for profit and by forcing their victims to perform labor.

For nearly 4,000 years of recorded history, some form of human trafficking (or slavery) has existed on every inhabited continent.  Only during the last 220 years, have we seen a change in the world’s view of freedom, a change that disrupted the widespread legal, religious, and cultural acceptance of trafficking.  Now, one of the most widely accepted international declarations is the United Nations’ protocol against trafficking in persons, and in the last few decades, about 175 countries have enacted some form of anti-trafficking legislation and adopted this protocol.  This shift was a massive accomplishment that calls for recognizing the hard work of the heroes who challenged the status quo.

Qatar has made significant strides in combatting trafficking in persons.  In 2017, it established the National Committee to Combat Human Trafficking.  The Residency Affairs Prosecution added a specialized unit for trafficking crimes, and a trafficking conviction took place in 2020.  The Ministry of Interior also created a specialized unit within the Criminal Investigations Department to serve as a coordination point for law enforcement authorities. Last year, the State Department honored Qatar’s Undersecretary of Labor Mohammed Al Obaidly as one of eight Trafficking in Persons Heroes around world, for his strategic and persistent drive to instill real change to combat the abominable practice.

There is still much work to be done, and we all have a responsibility to end trafficking in our communities. As I take this opportunity to educate the public about the devastating impacts of human trafficking, I encourage the private sector and business community in Qatar to follow and support the important reforms and legislation the government has enacted. We all have a responsibility in combating this crime. To learn the indicators of human trafficking and be informed and conscientious consumers, please visit: https://www.state.gov/20-ways-you-can-help-fight-human-trafficking/. It’s now society’s turn, and our responsibility, to follow the laws and help eradicate this heinous crime.