FOREIGN MINISTER AL THANI: (Via interpreter) In the name of God, most gracious, most compassionate, at the outset I would like to thank His Excellency the Secretary of State Mr. Mike Pompeo for visiting Doha, and I would like to welcome him on his first visit as a secretary of state. We are looking forward towards further such visits. We highly value and appreciate his partaking in the second U.S.-Qatari Strategic Dialogue, which reflects the excellent historical relations between our two countries and the alliance that was built in the last decades.

Today we are here to build on the outputs of the first Strategic Dialogue, and during our conversation, seven sessions are being held for further expanded discussions on different sectors: commercial, business, education, defense, security, and others. Our partnership with United States is a strong partnership based on very strong premises, based on an understanding and – mutual understanding and interests. We have signed three agreements today on education, culture, and an MOU for supporting defense activities in Al Udeid Air Base, and we are looking forward towards the tangible results of this dialogue for our strategic relations to witness a quality bond, a quality progress.

I’ve had – we have had a bilateral meeting with the Secretary of State, and we’ve discussed all the issues of interest for our countries, regional issues, regional security issues starting with the Gulf Cooperation Council and the peace process in the Middle East, as well as the reconciliation in Afghanistan, along with other issues such as Syria and counterterrorism. We are looking forward to the outputs of this meeting to be the foundation of a stronger future phase of relations between our two countries, and we hope that further political coordination continues on all issues of regional security of interest to both our countries.

Thank you, Your Excellency, for your attendance, and thank you for participating with this important Strategic Dialogue and this visit.

SECRETARY POMPEO: Thank you. Thank you, Foreign Minister Al Thani. Thanks for hosting the team here today in Doha. It was an honor to participate in the Strategic Dialogue. I know our teams did great work as well. Your country has been a great friend to the United States in many ways, and we’re deeply appreciative of that.

As President Trump noted when he hosted His Highness the emir at the White House last year, great things are happening in the relationship, and that’s certainly still true. Both of our governments have taken concrete steps to implement agreements signed at last year’s inaugural Strategic Dialogue in Washington, including in the fields of counterterrorism, combating trafficking in persons, cybersecurity, nuclear safeguards, and energy cooperation. Today we reached a few new agreements that will grow and make our relationship even more robust.

We focused first and foremost on security and defense partnership. We signed a new MOU on the expansion of our presence at Al Udeid. As the host of hundreds – excuse me, as the host of thousands of U.S. military personnel and the CENTCOM forward headquarters, this base is key to American security and our shared efforts to promote regional stability. We thank Qatar for its dedication to improving and modernizing it.

Today in our conversations I stressed the importance of unity among the Gulf Cooperation Council members. President Trump and I both believe the ongoing dispute in the region has dragged on for too long and the dispute benefits adversaries and harms our mutual interests. Our nations do important work and we have important work to continue to do together, and the United States hopes the parties involved will see once again the benefits of cooperation and take actions necessary to rebuild unity in their ranks.

A united GCC is essential to the success of the Middle East Strategic Alliance, which we hope will include the GCC, Egypt, and Jordan. The United States has continued to advance discussions on this alliance since the initial meeting of the GCC+2 at the UN General Assembly back in the fall in September, and I raised this topic again with Minister Al Thani and will do so with His Highness as well.

But in addition to defense and security partnership, we also discussed our steadily expanding trade and investment relationship. We are proud to have more than 120 of our companies operating here, creating opportunities for our people and yours. I know there’s more to follow. Your impressive efforts to improve labor regulations, to promote transparency, and to protect the dignity of over 2 million foreign workers here was also a focus of our efforts today.

We had several other agreements that the dialogue yielded. On education, we’ve agreed to share best practices and expertise with each other. This cooperation will help enrich, strengthen – and strengthen educational practices, and we will conduct exchange programs to promote educational opportunity and development.

We also signed a statement of intent to promote our cultural ties. You can expect to see new events, youth engagement exchanges for rising leaders in a variety of fields, and relationships between cultural institutions that will allow Americans and Qataris to learn more about each other.

Our growing partnership with Qatar continues America’s long record of helping Middle East nations live in peace and prosperity. The United States looks forward to building on this momentum, strengthening our ties, and promoting our sustained cooperation. Thank you very much, Foreign Minister, for hosting me and my team here today.

QUESTION: (Via interpreter) My question to Your Excellency: Anthony Zinni’s resignation, does it mean that the United States is no longer focused on the Middle East? And what has the U.S. done regarding the humanitarian issue when it comes to the GCC crisis with families being separated forcefully?

SECRETARY POMPEO: So two questions there. The first question is the departure of Mr. Zinni in no way reflects any change in America’s Middle East efforts, our strategy, or our ongoing commitment to the region. It was a time when it was time for change. He made this decision to move on, but America’s commitment remains unchanged. We will continue to have a robust set of dialogue around the very issues that he was handling on our – on the United States’ behalf.

And with respect to humanitarian issues here and elsewhere in the region, I think the United States stands second to none in the – not only the amount, the dollars that we have committed to avoiding humanitarian crises in the region, but also our personal commitment, the things that my team on the ground here in Doha and throughout the region does to make sure that we’re responding to humanitarian challenges wherever we find them.

QUESTION: (Via interpreter) Said‎ Boukhafa from Al Jazeera. My first question is to Mr. Al Thani. We’ve recently saw a lot of Qatari diplomacy being active, starting with the Doha Forum that has hosted a number of high-level officials, mainly the UN secretary-general. Is Qatar still concerned with the issues of mediation that it had led before?

My second question is to the Secretary of State, Mr. Pompeo. You’ve announced that the United States is currently working on preparing an international conference to discuss Middle Eastern issues in Poland. I would like to ask the Secretary of State what are the chances of success of such a summit while a lot of crises are ongoing in the region. Thank you.

FOREIGN MINISTER AL THANI: (Via interpreter) Now for the Qatari diplomatic activity, it’s continuous and it hasn’t stopped. Be it through conferences or through the Qatari diplomacy endeavors on many issues, Qatar supports the efforts of reconciliation and mediation in many regions, mainly the Darfur issue, which still continues under Qatari mediation, and we have called on other parties to join the Doha agreement. Furthermore, Qatar is actively partaking in the Afghanistan reconciliation process. We hosted the political bureau of Taliban, and we are working together with our partners, the United States, in order to establish peace in Afghanistan.

Furthermore, there are other files that we are working on and we are constantly consulting with the United States over with a number of other parties involved, be it the issue of Syria, the peace process in the Middle East. So we look – we always look for the diplomacy to be the solution for such crises and to end the humanitarian crisis and hardships of our peoples, and this is considered to be as a common denominator in the U.S. and Qatari policies.

SECRETARY POMPEO: Your question to me was about the ministerial that will be held in the middle of February in Warsaw. One of our objectives – they’re manifold. One of the things I think the world will see as we come together is the enormous coalition that is prepared to assist in creating stability and peace here in the Middle East. And so we will gather around a number of different topics. Certainly, the coalition that continues to fight ISIS around the world will be part of that. We’ll have conversations about counterterrorism and how the whole globe – there’ll be countries at this from Asia, from Africa, from all across the world. It won’t be confined to the United States and Europe and the Middle East. There’ll be a broad coalition of countries present, and we’ll work on many issues, including how it is we can get the Islamic Republic of Iran to behave more like a normal nation.

So there’ll be many topics discussed by this broad coalition, and we hope to have a set of deliverables that come out of it that are important as we move forward in 2019.

QUESTION: Thank you. Mr. Secretary, how does that dispute between Qatar and Saudi undermines this effort to counter Iran? And also, can you tell us what you expect to ask to – in Riyadh to Mohammed bin Salman about the killing of Jamal Khashoggi?

And just a very last quick one: Can you confirm that the White House asked in September to provide military options to strike Iran? Thank you. 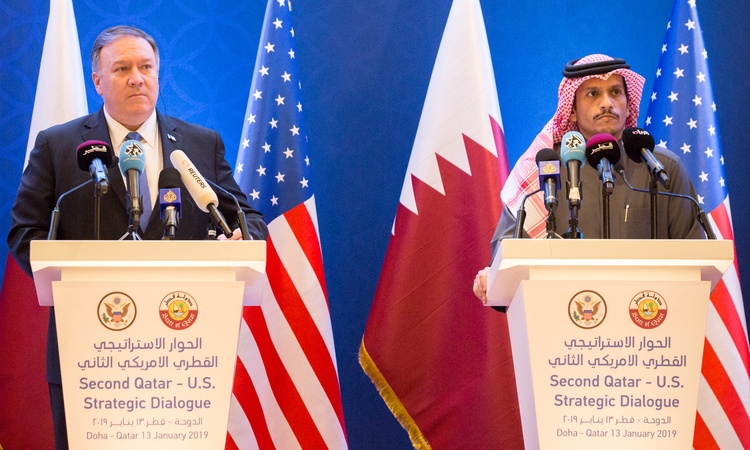 SECRETARY POMPEO: With respect to your third question, I don’t have any comment.

With respect to your second question, we will continue to have conversation with the crown prince and the Saudis about ensuring that the accountability is full and complete with respect to the unacceptable murder of Jamal Khashoggi, so we’ll continue to talk about that and make sure we have all the facts so that they are held accountable, certainly by the Saudis but by the United States as well where appropriate.

And as for the GCC, in my statement I made clear we’re all more powerful when we’re working together, when disputes are limited, and when we have common challenges in the region and around the world, disputes between countries that have a shared objective are never helpful. They never permit you to have as robust a and powerful a response to common adversaries or common challenges as if – as you might when countries have a dispute between them. We see this all the time. We have lots of places where we’re building out coalitions and there are challenges between different parts of the coalition. It’s something we work through, work around, and we’re hopeful that the unity of the GCC will increase in the days and weeks and months ahead.