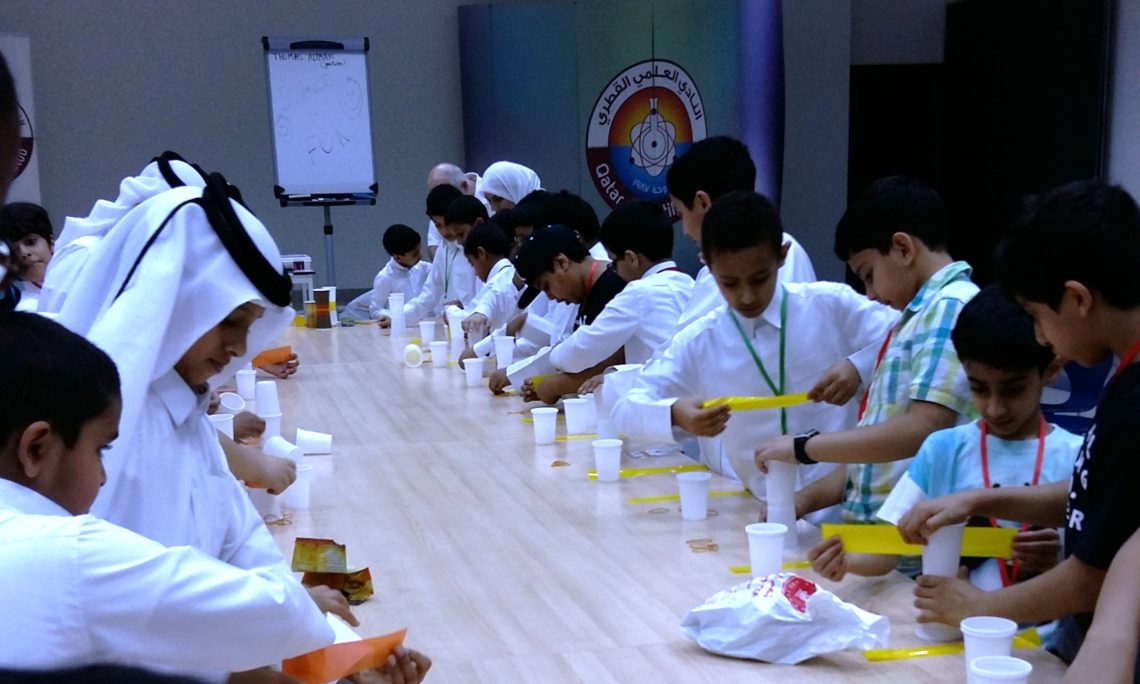 IIP speaker Mr. Thomas Altman was the center of focus at the summer camp for kids organized by Qatar Scientific Club for five days from July 17 to July 21, 2016 in the Ceremonies hall of the club in Doha.

For five days Mr. Altman kept the kids both boys (45) and girls (35) spell bound with 3 simple do-it-yourself activities per day that he would do first and then let the kids do them to take home. Mr. Altman would then explain the science behind it. Doing hands-on makes it easier for the kids to comprehend and connect the theory they learn at school. Over a period of five days Mr. Altman covered topics such as Electricity, Magnetism, Force, Sound and Light which are the basic tenets of science.

Some examples of the activities the kids did were:
They explored the basics of quantum energy using a piece of ‘glow in the dark’ plastic, a red LED and a UV LED.
They made a very nice spectrometer using dual axis diffraction grating, a cardboard tube and some aluminum foil.
They made a “Wave Tank” using a plastic water bottle (FUGI or VOSS) half filled with water and mineral oil.
They learnt the principle behind a Magnetic Train Launcher by making a ball launcher using a couple of magnets, a couple of steel balls and a ruler.
They used a small slinky and a couple of large plastic cups create the best sound effect communication device ever – “Slinky Communicator”.
They saw how electricity is generated by using a simple toy motor and an LED.
They turned white Elmer’s glue into a ‘non-Newtonian’ fluid – “Silly Putty”.
They learned how to make the secret mixture for making huge bubbles, and the physics behind it.

Mr. Altman also trained a group of teachers and facilitators of the club in doing these activities and encouraged them to think out of the box in coming up with ideas to help explain the complex principles in a simple way and to inculcate a culture of reasoning.

Rashid Rahimi, Head of Fablab and Innovation Center thanked both Mr. Altman and the embassy for partnering with them in this event and looked forward to doing many more such events in the future.