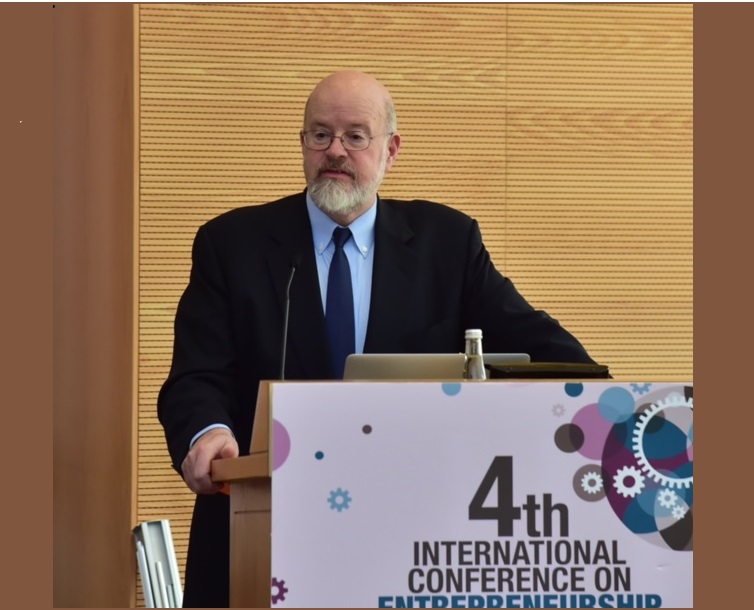 Terry Jones, founding chairman of Kayak.com, began his visit to Doha with a keynote speech on Entrepreneurship Education at Qatar University’s (QU) 4th annual prestigious Entrepreneurship and Economic Development (EED) conference, which included the likes of the Minister of Economy and Commerce, the President and Dean of the Business College of QU, faculty members, students, business leaders, and the press. His presentation offered great insights into why entrepreneurship education is important and how it impacts the national, regional, and international economies. Terry Jones did a presentation on “Disruptive Technologies – The fuel for innovative new business models” at Qatar Business Incubation Center’s Speaker Series program organized jointly by the Qatar Business Incubation Center (QBIC) and the Ministry of Transport and Communications’ Digital Incubation Center (DIC) . The audience included QBIC’s start up business incubatees, start-ups from Qatar, entrepreneurs, the CEO of QBIC, the CEO of Qatar Development Bank (who is also the Chairman at QBIC), and members of the general public. In his presentation, Terry emphasized the importance of innovation and how can it be used as a tool against Disruption. “Stars of Science” invited Terry Jones to participate in one of its episodes as a mentor to the competitors. This episode along with a separately recorded one-on-one interview with the speaker will be aired on MBC4 and on all social media platforms in the fall this year to audiences of more than 8.5 million, based on viewership last season. Terry Jones gave a presentation at the Hamad bin Khalifa University in Education City for students and faculty of the university and the 6 American universities in Education City (Carnegie Mellon, Georgetown, Weill Cornell, Texas A and M, Virginia Commonwealth University, and Northwestern). He spoke on “The Importance of Innovation and Digital Relationships in an Entrepreneurial World” wherein he stressed the need to maintain digital relationships in a world where the means of communication has undergone an ocean of change in the last decade. Terry Jones was invited as one of the industry stars, who has been through the peaks and troughs to bring his ideas to life, to join the Director of QSTP, Dr. Maher Hakim, for a discussion on stage about Building, Managing, and Leading Innovation Teams. This was the first time QSTP’s hall was at full capacity, with some audience members standing in the back. Q and A was lively and engaging. Terry Jones mentored the incubatees incubated at Qatar Business Incubation Center, whose startups are at various stages of formation. Terry provided one-on-one mentoring sessions for each group of incubatees, listening to their stories, the impediments they faced, and the solutions they were seeking. Terry was impressed by the depth of knowledge they had and the quality of ideas they were chasing. He also suggested some companies based in U.S. with whom they could partner and encouraged business relations with U.S. entities. IIP Speaker Terry Jones, founding chairman of Kayak and executive chairman of wayblazer, gave an exclusive interview on Al-Jazeera’s live interactive news bulletin about his week of programming in Doha with the US Embassy. He addressed Arabs at home watching, encouraging them to be inspired, get engaged, and follow their dreams, giving Silicon Valley as an example of a vibrant business ecosystem and a place to invest. This segment reaches between 30-50 million viewers every night. Ambassador Dana Smith hosted an all-female networking event with businesswomen from the Qatar Chamber of Commerce, the American Chamber of Commerce, the Qatari Business Women’s Association, and the American Business Women’s Association, respectively. This was the first time the two groups met for a combined networking event. Terry Jones, famed author, business leader, and angel investor, spoke to faculty, business students, and invited business leaders at Carnegie Mellon University-Qatar as part of their prestigious Dean’s Lecture Series. Terry encouraged students to take risks and not be afraid. Two Guys (Gals) and a Dog can take on Silicon Valley.