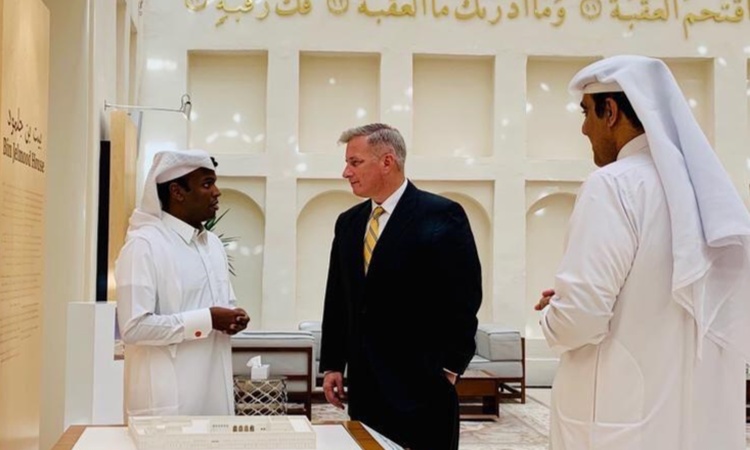 The crime of human trafficking is global in scope, affecting every country on earth, including the United States and Qatar.  Also known as modern slavery, it includes sex trafficking, forced labor, debt bondage, and domestic servitude.

The annual Trafficking in Persons Report has become a significant part of the Msheireb Museum’s Library, specifically Bin Jelmood House, which provides a space for reflection on slavery and how it has evolved into modern forms of human exploitation.

Every year the U.S. State Department releases the Trafficking in Persons Report, which examines the efforts made by governments around the world to fight this crime.  Ending human trafficking globally requires a coordinated approach between the public and private sectors and civil society in all countries, and an important part of the strategy to combat modern slavery is raising public awareness.  Bin Jelmood House provides an opportunity for visitors to make a personal commitment to joining the fight against all forms of human trafficking.

Hafiz Ali, Director of Msheireb Museums said, “We are honored to add this copy of the report to our Museums library. Bin Jelmood House, part of Msheireb Museums in Msheireb Downtown Doha, provides an opportunity for visitors to make a personal commitment to stand against the various forms of human trafficking.  As an educational platform, the museum has been raising awareness, and gaining local and international attention.”

The United States Ambassador-at-Large to Monitor and Combat Human Trafficking John Cotton Richmond said, “The Msheireb Museum’s modern slavery exhibit highlights the importance of combating human trafficking in Qatar.  The Bin Jelmood House paints a clear picture of Qatar’s trafficking trends and sheds light on this issue for thousands of visitors and Qatari nationals each year.  The United States stands by Qatar in its efforts to raise public awareness and taking action to stop the crime of human trafficking, which affects not just our two countries, but every country in the world.  With sustained initiatives, we hope the Bin Jelmood House will continue to do its part to help raise awareness of human trafficking in Qatar, and ultimately generate efforts to protect victims.”

Ambassador Richmond noted that U.S. collaboration with Qatar on fighting human trafficking is the strongest it has ever been.  The United States and Qatar signed a Memorandum of Understanding on Anti-Trafficking in 2018,  Since then, the two countries have worked with more than 30 implementing partner offices and organizations to implement over a dozen initiatives including capacity building, training, networking, exchanges, consultations, and awareness raising including events like this one.  The American Chargé d’Affaires attended the July 30 conference on “World Day against Human Trafficking” hosted by the Qatari government and the UN’s International Labor Organization (ILO), which coincided with the opening of the first Trafficking in Persons (TIP) shelter for men and women in Qatar.  The shelter opening is just one of several goals of the Memorandum of Understanding.