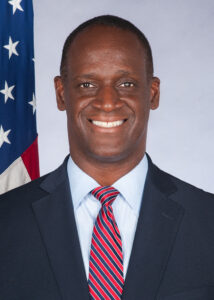 Upon his arrival, Ambassador Davis said, “I am deeply honored to serve in this role, and I look forward to contributing to the important relationship between our two countries.  Qatar and the United States work together every day to protect the security of our two countries, promote prosperity and economic development, and build the people-to-people ties that make our relationship strong.”

Timmy T. Davis, a career member of the Senior Foreign Service with the rank of Counselor, most recently served as the Executive Assistant to the Secretary of State. Prior to that, Davis served as the U.S. Consul General for Basrah and Southern Iraq. His overseas tours include Guatemala City, Guatemala; Najaf, Iraq; Canberra, Australia; and Bogota, Colombia.

His domestic assignments include Senior Watch Officer in the State Department Operations Center, Special Assistant to the Secretary of State, Director for Iraq at the National Security Council, Deputy Chief of Staff to the Special Presidential Envoy to Counter-ISIL, Senior Advisor to the Counselor of the Department, Chief of Staff to the Undersecretary for Political Affairs and Acting Chief of Staff of the Department of State. Davis, who holds a Distinguished Honor Award and multiple Superior and Meritorious Honor awards, is also the recipient of the Department’s Ryan C. Crocker Award for Outstanding Leadership in Expeditionary Diplomacy and the American Foreign Service Association’s William R. Rivkin Award for Constructive Dissent.

A native of Virginia, Davis attended the University of Alabama. He served in the United States Marine Corps for nearly a decade including operations in the Horn of Africa and Iraq before joining the Foreign Service. Davis speaks Spanish and Arabic.