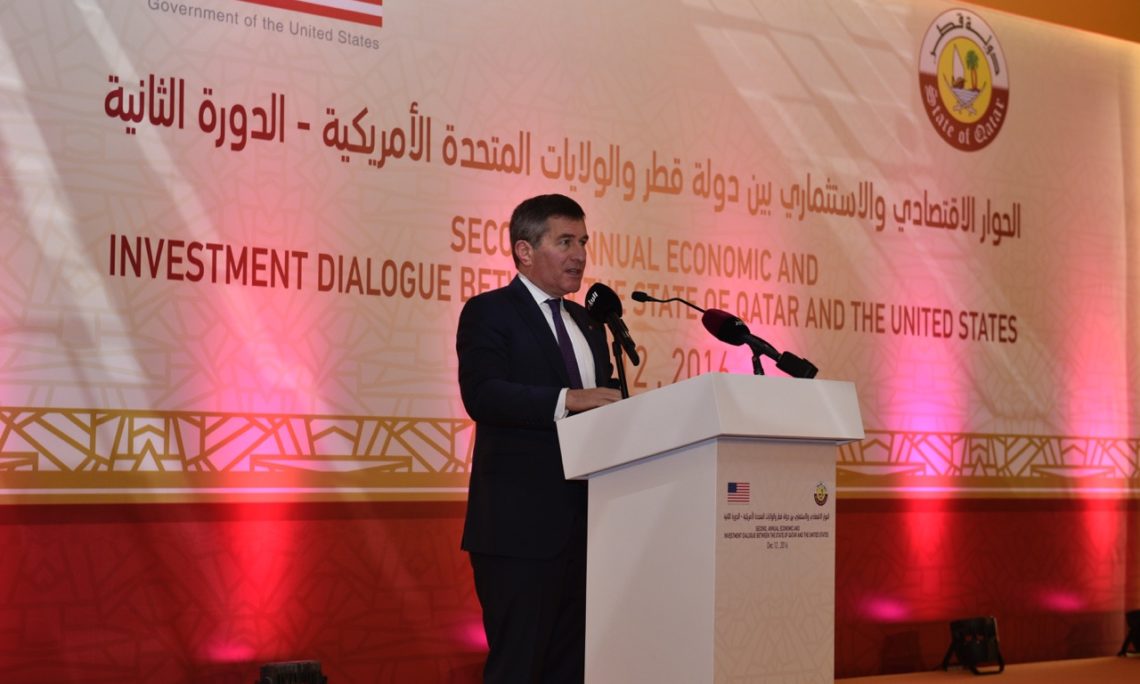 Assistant Secretary of State for Economic and Business Affairs Charles Rivkin addresses the opening session of the Dialogue.

Joint Statement by the U.S. and Qatar on the Conclusion of the Second Annual Economic and Investment Dialogue

Doha – Government representatives from the United States of America and the State of Qatar met in Doha on December 12 for the second annual U.S.-Qatar Economic and Investment Dialogue (EID). The series of meetings, co-chaired by Assistant Secretary of State for Economic and Business Affairs Charles Rivkin, Assistant Secretary of State for Near Eastern Affairs Anne Patterson, and State of Qatar Minister of Finance Ali Shareef Al Emadi, continued the inaugural dialogue convened in Washington, D.C., in October 2015. The talks brought together key decision-makers to identify additional ways to bolster financial, economic, and investment relations, and build on momentum generated by last year’s EID.

The United States and Qatar enjoy a robust and growing economic and commercial partnership. Bilateral trade between our countries is estimated to exceed $7.5 billion in 2016, and Qatar is among the top four markets in the Middle East for U.S. exports of goods and services.

During the EID, officials discussed a wide range of measures aimed to deepen economic ties and promote new and ongoing bilateral initiatives including: bilateral mechanisms for promoting investment such as a Bilateral Investment Treaty; SelectUSA and other programs designed to facilitate investments in the United States; special economic zones and other programs to promote investment in Qatar; and opportunities for collaboration in key business areas, such as energy, aviation, and intellectual property rights.

Officials also discussed recent successes in the U.S.-Qatar economic partnership, including: the expansion of the Qatar Investment Authority office in New York, NY, which plans to invest $35 billion in the United States in 2016-2021; the establishment of a Global Entry facility at Hamad International Airport in Doha, Qatar; new aviation passenger safety bilateral agreements; and the Sister City Agreement between Doha and Los Angeles, Calif., signed in November 2016.

Assistant Secretary Rivkin highlighted the importance of continued communication coupled with concrete follow-up actions, noting the robust and enduring bilateral diplomatic ties between Qatar and the U.S. served as a foundation for boosting bilateral trade and investment and removing barriers to entry.

The United States and Qatar discussed possible dates for the next EID, which is planned for the fall of 2017 in Washington, D.C., potentially combined with a trade and investment conference in Los Angeles, Calif.

The State of Qatar delegation consisted of the Ministries of Foreign Affairs, Finance, Economy and Commerce, Transportation and Communications, Municipality and Environment, Health, and Education and Higher Education, as well as the Qatar Investment Authority, Qatar Foundation for Education, Science and Community Development, Qatar Airways, Qatar Petroleum, Qatar Central Bank, Ooredoo, Qatar Financial Center, the Supreme Committee for Legacy and Delivery of the 2022 FIFA World Cup, and the Public Works Authority (Ashghal).

On the sidelines of the Economic and Investment Dialogue, a U.S. business delegation led by the U.S. Chamber of Commerce met Minister of Economy and Commerce Sheikh Ahmed bin Jassim Al Thani and Minister of Energy and Industry Saleh Al Sada, as well as representatives of the Qatar Financial Center, the Supreme Committee for Legacy and Delivery of the 2022 FIFA World Cup, and the Public Works Authority (Ashghal). Together with the U.S. government delegation, the trade mission participated in a senior-level working lunch with Qatari government officials and later attended a reception hosted by the Qatar Chamber of Commerce under the auspices of Prime Minister Sheikh Abdullah bin Nasser bin Khalifa Al Thani. In addition, the American Chamber of Commerce Qatar hosted a lunch for the trade mission, representatives of the U.S. government, and Qatari business owners.