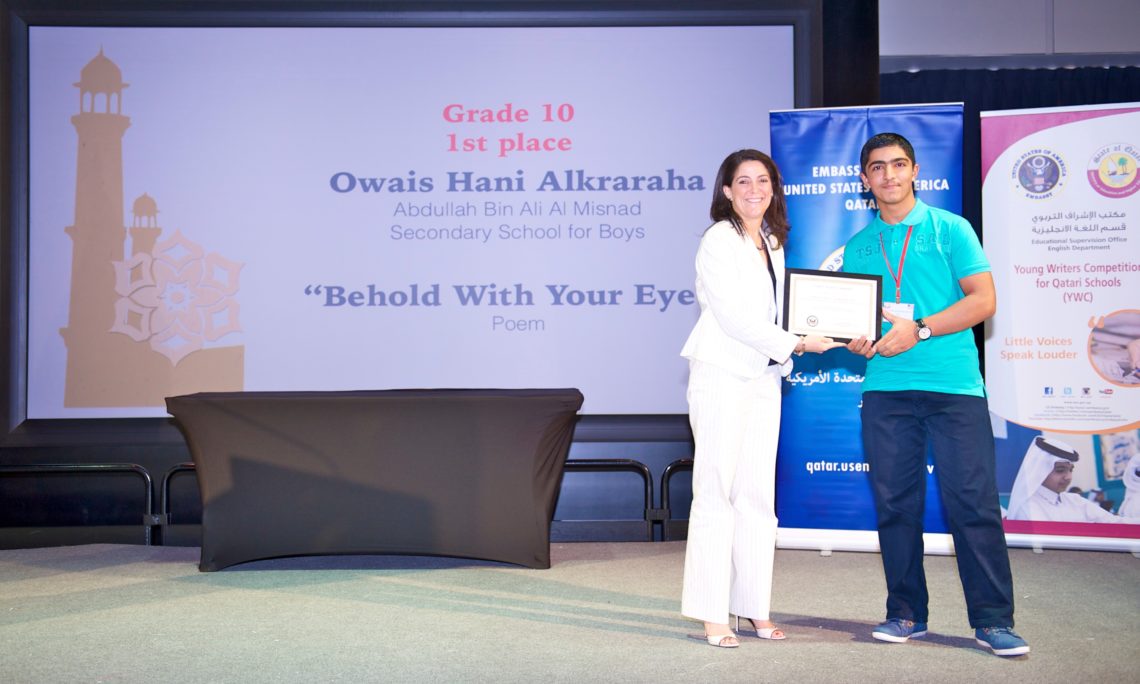 Ambassador Smith with one of the winners

The Young Writers Competition is part of an ongoing partnership between the U.S. Embassy Qatar, the Ministry of Education and Higher Education of Qatar and Virginia Commonwealth University Qatar. The inaugural competition took place during the 201415 academic year and students from 104 of Qatar’s independent schools participated. This year, over 230 students from 122 independent schools participated.

Dean Akel Kahera of Virginia Commonwealth University Qatar stated “Virginia Commonwealth University Qatar is delighted to support the Young Writers Competition for the second year in a row, and to be a vital part of the ongoing partnership between the U.S. Embassy Qatar and the Ministry of Education and Higher Education of Qatar.  Collectively, the accomplishment of the students raises the visibility of the State of Qatar as a hub of creativity, a source of talent, and a leading contributor to the important dialogue about the role of education and human development in the region.”

The aim of the competition is to encourage students to read, write and think critically about important topics in education, culture and society, while practicing and improving their English writing skills. The writing themes for this year’s competition focused on global citizenship and on education.  Students from grades 5, 8, and 10 were asked to write a personal essay, short story or poem on one of these topics and were given writing prompts that included inspirational quotes from Her Highness Sheikha Moza Bint Nasser.

The students with the top five writing pieces from each grade were honored at today’s event and their work will be featured in this year’s Young Writers Journal, which will be published by the U.S. Embassy and distributed to local schools and educational institutions throughout Qatar in May.  The journal will also feature illustrations by visual art students from Virginia Commonwealth University Qatar.

Feedback from students who’ve participated in the program has been superlative.  One grade 10 student who participated in last year’s program stated that “participating in this competition has inspired me to write more and more, and it has made me realize my writing talents that I didn’t know before.  It was an exciting experience that I’ll never forget. I feel proud of myself.”

For more information about the Young Writers Competition please contact the Public Affairs Section of the U.S. Embassy Doha, Qatar at: pasdoha@state.gov.