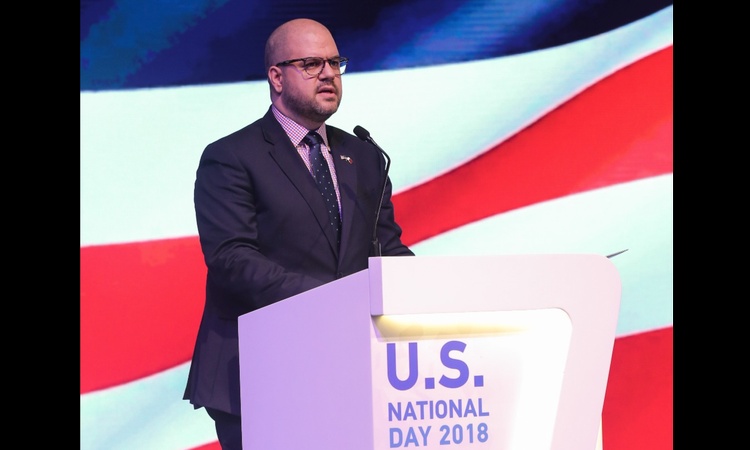 Chargé‎ d’Affaires Ryan Gliha‘s speech highlighted the most important ideals shared between the American and Qatari people:  independence, liberty, and the pursuit of happiness.  Acknowledging the challenges Qatar has faced in the recent past, he remarked that it is during “times of adversity… that the true spirit of a people comes through.”  Mr. Gliha drew a parallel between the Qatari and United States national anthems and how both embody the commitment of a people to preserve their freedom, way of life, and dignity.  He concluded his remarks by highlighting the recent successes in the U.S-Qatar relationship in the areas of trade and investment, defense and counter-terrorism, and education and cultural exchanges.  Pointing to the first annual Strategic Dialogue held in Washington D.C. on January 30, Chargé d’Affaires Gliha remarked that,” the relationship has never been stronger,” and that the high-level dialogue is a signal of the growing significance of the two countries’ bilateral partnership on all fronts.

The Strategic Dialogue symbolizes the commitment of both countries to deepen bilateral cooperation  and establish a shared vision for the future of the U.S. Qatar strategic partnership.  In the area of trade and investment, the United States is among Qatar’s largest trading partners, as well as one of the largest investors in Qatar’s energy sector.  In the field of security cooperation, Qatar is one of the top partners of the United States military and has made close to $25 billion in purchases via U.S. Foreign Military Sales programs, including its recent commitment to purchase F-15 aircraft to support and expand the Qatari Emiri Air Force’s technological and defense capabilities.